I was born on my Nana's birthday and she has always made sure to tell me that I was the best birthday present she has ever gotten.

As I got older, it was a game between us to see who could call the other one first on our day...it's something that we have continued.

On our day this year, I was the first to make the call.  The phone rang and rang and I left her a message to wish her a Happy Birthday, let her know I was thinking about her, and to tell her I love her.  I went on with my birthday celebrations as planned.

When I got home later on in the afternoon, the red light on the answering machine was blinking.

When I was little, I loved to hear my Nana sing in church and she would bless us at Christmas time by singing a few carols while my Mom played the piano for her.  I will always cherish those memories.

I pressed the button on the answering machine and my Nana started to sing "Happy Birthday".  After the first line, I sat down in the chair at the counter, with tears in my eyes and just listened...taking in every note, every word, every minute.  And I smiled when, at the end, I could hear my Papa singing along to me in the background.

I have never been so thankful for a missed call.  It was truly the best birthday present I got this year.

little somethin by Beth at 8:50 AM 0 things to add

Good-bye Twenty Eight (hello some number I don't like)...

This morning I woke up to the first day of my last year in my twenties.  Although I would love to either rewind and be 28 again or fast forward and just spend two years in my thirties, I can't not celebrate twenty-nine today just because the number drives me nuts.

Twenty-eight was all I hoped it would be.  It was a great year...one that I will never forget.  Here are twenty-eight highlights (in no particular order):

- Less than three months in to my 28th year, my husband was blessed with employment after 22 months of being jobless.  It was a great belated birthday present...and came at just the right time.

- A few days after turning 28, I completed my very first marathon.  I knew it would not be my last and five months later, I completed my second...and shaved some off of my previous time.  I am looking forward to running Chicago (my third marathon!!!) in October!

- I was privileged to be able to run a half marathon with my sister and ran a personal best.

- I was blessed to celebrate another year with my princess...she turned six and finished kindergarten with in a week of eachother.

- planted my first (very) mini garden...and loved being able to eat a fresh cucumber almost every day all summer long.

- I was reminded in month 21 of our employment that God remembers me and was called to remember how far He carried us.

- Ran a race in the mud and found out that I like getting dirty.

- I spent a wonderful week in Michigan with my family and took my kids up to the lake I spent summers at when I was a kid.

- My youngest turned three...and it was a little sad for me.  My baby is growing up.

- My princess got her ears pierced...and I was lucky enough to be the one holding her hand.

- My middle man turned five in true Mario party style... it made my day to see the look in his eyes.

- I was able to go to PRN at work...and I love being able to work four times a month (or more if I chose).  Dinner time with my family again!!

- I ran my third CRIM...alone...and man was it lonely...and I have demanded a rematch.

- I became the Mom to a first grader and a kindergartner...and it took some getting used to.

- Friendships grew deeper...and I am so thankful for each one of my girls I call "friend".

- Strep became all too common in our house.

- It's the year I stopped believing the lies and found out who I really am.

- I fell in love with my bread machine.

- Found out how wonderful eye liner is (thank you, Saira)

- Celebrated 8 years of marriage...and, as I watched marriages crumble all around, it sparked something new inside of me.  We spent two of the toughest years clinging to eachother because we had to...we have weathered the storm and I want to sit beside him, hold his hand, and talk and laugh through this calm we are experiencing.

- Once again, made it through another year with not a single cavity...and never had a ticket either!

- Watched my little girl be wheeled in to surgery and became even more thankful for all of my children's health.

- did something I never thought I would do : agreed to get a puppy...and fell in love with her...well, fell in to like with her...no dog can take the place of my Macy girl.

- Went indoor rock climbing and decided that we need a date night every once in a while that is out of the norm.

- kicked my vacuuming habit and no longer vacuum at least once a day.

and because I am drawing a blank I have to dig deep here:

- Did not accomplish a goal of mine and cannot play one single song on my guitar...maybe 29 will be the year.

- Have felt more blessed this year than any other year in my whole 29 years on this earth.

Oh, twenty-nine...how I hate that number...but love that I have been given another year of life.  Here's to twenty-nine...may it be even better than twenty-eight!

little somethin by Beth at 5:35 AM 1 things to add 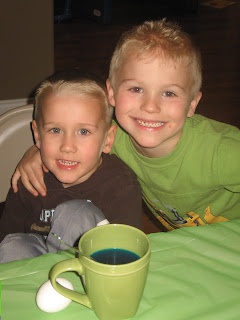 Coloring Easter eggs with the cousins!! 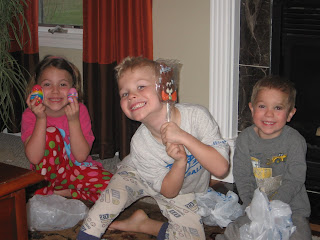 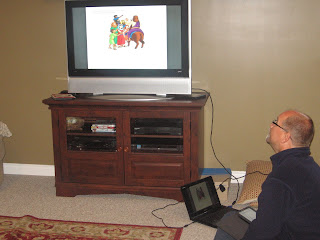 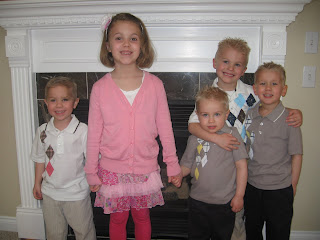 All dressed up (and missing two cousins) 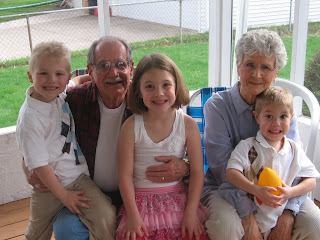 My three cuties with their Great Grandparents...blessed! 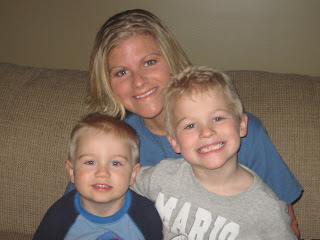 These two could pass as brothers. 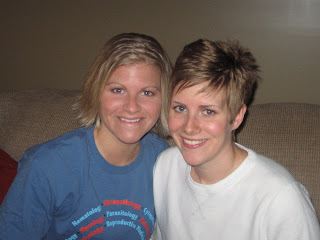 Today is my husband's 30th birthday.  Every birthday of his that we celebrate together, I am more and more thankful for just what this day means.  I have been blessed to spend nine birthdays with this man of mine and pray that God gives many more. 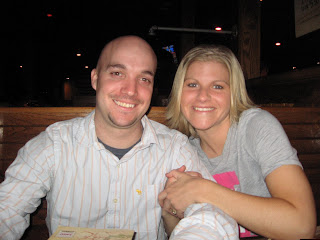 Happy Birthday, Dan.  You have blessed my life. 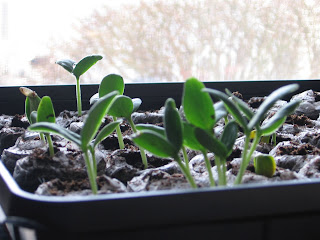 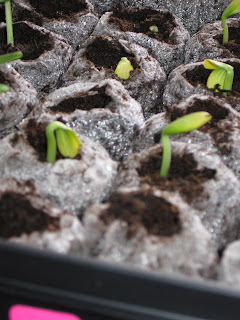 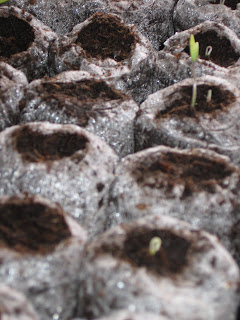 Tomatoes
And yet to be seen above the soil: Green Peppers

little somethin by Beth at 8:47 AM 0 things to add