My middle man ended up coming home early from school with a tummy ache yesterday.  Within one hour, he was in the bathroom puking all over my shower curtain, the back of the toilet, and on the floor.  He couldn't stop apologizing.  He's such a sweetie even when he is sick.

So, with Dan at work, I was the one on throw up duty yesterday day and I was happy to be there with my baby.  I handled it pretty well and didn't heave once while wiping up the puke or rubbing his little back while he threw up.  I could possibly be getting better at this.  He threw up six times in five hours and then everything stopped...I was thankful that he was able to eat a slice of toast before bed and keep some juice and water down.

This morning, he was feeling better but was still having some "back door" issues so I called him in to school.  We still had to take my princess (who, may I add, holds the record so far this year for being the healthiest one of the bunch).

After dropping her off, I explained to Landon that the ride home is when I pray for both him and his sister and for their day at school.  He asked me to pray out loud and so I did.  After, he told me that he also knew that I prayed for him last night at dinner when he was sick...he said he was secretly listening in from the living room couch.  Then he said something that caused my heart to swell and my eyes to tear up: "Mommy after you prayed for me I quietly prayed for you that you would have a better day tomorrow."


And, that about does it.  Just hoping for a healthy week this week...

little somethin by Beth at 6:31 PM 0 things to add

Go to her blog and pray for her and her family.

little somethin by Beth at 8:43 AM 0 things to add

My Princess is a dreamer...and I really don't think she gets that from me.  I am a more realist kinda girl...in almost everything...I have my moments though.

She started girl scouts in the fall and the time has come for the annual cookie sale.  We were talking about goals.  I explained what a goal was and asked her what her goal was as far as how many boxes of cookies she would like to sell.  She quickly responded, "My goal is 1000 boxes!"  Yep, she's a dreamer alright! I told her that maybe she should be more realistic about her goal and set it a little lower so it could actually be something she could possibly reach.  She sat and thought and then said, "Okay 300 boxes!"  I smiled.

As of yesterday though, she has sold seventy-eight boxes of girl scout cookies.  As the end nears, the Momma in me will have to resist (maybe unsuccessfully) making it an even one hundred.

little somethin by Beth at 9:18 AM 1 things to add

I had my annual review at work yesterday.  I was pleased.  It made me feel very competent in my position and it was nice to hear how much my boss appreciates me and how highly he thinks of me and the work that I do.  It was a great way to start my work day...and it got me thinking...

Some of you may already do this in your homes.  How great it would be to do an annual, semi-annual, or even monthly review in our marriages, in our parenting, in our homes?  Would it make me think twice before disrespecting my husband?  Would it make a difference in the way I parent my children...the quality time I spend with them?  Would it make a difference in how efficiently my home is run?  I am sure it would...and I am also positive that kind words from members of the household...words of appreciation...would do wonders in how often my family and myself are doing something with a cheerful heart.

How ever often, I think it might be something to think about incorporating some sort of "review" in our house.  Too often, we take each other for granted around here.  Our household duties are just expected as part of the husband's, or the wife's, or the children's job description.

I think it's time for a Brady Family meeting here.

little somethin by Beth at 4:16 PM 0 things to add 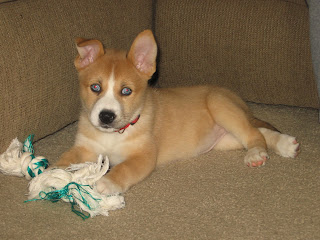 little somethin by Beth at 6:12 AM 0 things to add 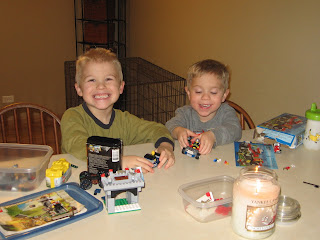 Over Christmas break, the boys discovered Legos...and love them!  They both got two sets for Christmas and while all the pieces have gotten mixed up (easily fixed) they have enjoyed playing.  They are brought out at least once a day and played with for hours at a time.  In fact, that's just what my littlest man is doing as I type.  Build away boys, build away.

Holidays to the Present...

- Our Christmas was wonderful.  We got to spend it in Michigan with my side of the family.  It was filled with fun, food, and lots of laughs.  It was great to see everyone, watch my kids play with my siblings' kids, and laugh at each other while we played Just Dance 2.  It just seems to keep getting harder when we have to say our goodbyes and take our usual route home.  My middle man has the most difficult time saying good bye.  This time, he did the most heart breaking sob down my parents' long driveway...which makes me only cry harder.  It's always sad to me when we pass by the welcome center and the Welcome to Michigan sign on the other side of the highway.  It's then that I truly feel disconnected from my family...it always gets me a little teary.  Can't wait to get back to Pure Michigan!

- It was so nice having the kids home with me for two weeks.  We spent a lot of time just being lazy.  The time flew by so fast and before I knew it, I found myself with an ache in my heart driving away from the drop off line watching my older two kids in my rear view mirror.  They are happy to be back in to our usual routine...and my little man is happy to have Momma all to himself.

- I did some much needed painting in my kitchen and dining room...and got something new to hang on my dining room wall.  Because I love painting so much (and I am not being sarcastic) I couldn't stop myself and continued on down the stairs.  It gave everything a fresh look...and it was nice and relaxing for me.  Best part is that it was all leftover paint from the kids' rooms (we keep it pretty neutral around here) and so it didn't cost me a penny.

- This past weekend, Dan and I got some alone time with our princess.  The boys went to their cousins' house for a sleepover and she chose to stay with us.  We went out to eat, just the three of us, and then she wanted to head over to Borders to pick out another chapter book of her own.  I thought we would be there forever (it was a bit overwhelming for her) but she finally decided on The Little Princess.  She's a great little reader and I am happy to cultivate a love of reading in her.  She has been reading in her room every chance she gets.

I have a pretty cushy schedule.  A month after Dan started his new job, I was able to cut back hours at work.  I have four set days a month that I work (three Saturdays and usually a Monday).  I pick and chose if I want to work any other hours for the month.  I am so thankful for my job.

Yesterday, I would have rather stayed home.  It was the kids first day back to school and I was feeling really down about that and a few other things...not to mention the laundry that is taking over all of our laundry baskets. So, I tried to find coverage so that I could take the day off.  It looked promising, but in the end, I walked through the door of the hospital at 1:25 and started my shift.

I believe there is a reason and a plan behind everything.  God knew that I didn't want to work, but He knew what I needed even more.  I was supposed to be at work yesterday...it just took a few hours for me to realize that.

It wasn't really until about four hours in to a very busy shift that I began to put it all together.  I saw a lot of my old patients last night...patients that I haven't seen in about six or so months...people who I know their story and have prayed for...a double lung transplant, a colon cancer patient, a breast cancer survivor, another cancer patient all of which have made me so very thankful for everything that I have and all of which I truly admire their strength and fight.

It was an encouragement and a blessing to be at work yesterday...and someone was even kind enough to treat me to dinner.  Not bad, not bad at all.

little somethin by Beth at 8:54 AM 0 things to add

A New Year
A Time of reflection
Thankfulness floods over me
because of all He has brought us through
over the past year
His faithfulness
His provision
His love
His mercy
His grace
His reminder
at the stroke of midnight
that the old things are gone
and the new has come
He has made all things new
We put 2010 behind us
but not without
remembering
and meeting a new year
with anticipation.

little somethin by Beth at 5:24 PM 0 things to add