On Saturday, I went out grocery shopping by myself while Dan kept the kids entertained at home. I wasn't gone for that long...nor did I expect a last first to happen while I was away.

When I came home, my Littlest Man was on two wheels. His training wheels were tossed to the side. My Littlest Man is little for his age, but I could have sworn that he grew a couple inches while I was away. I was so excited for him, and frankly, I was thrilled that now I won't have him lagging behind on bike rides...bikes are much faster without those training wheels! It did however, remind me that we will be hitting another big, huge milestone in just a few months...my Littlest Man is going off to kindergarten in the fall...but for now, I like sitting in the driveway and watching him speed around on his two wheeled bike, his little bony legs peddling so fast, asking me to watch him...and I do because, afterall, there is no pause button. 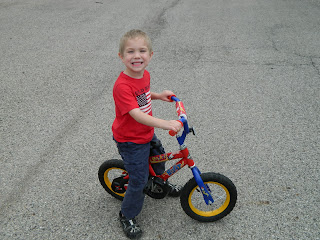 little somethin by Beth at 4:23 PM