Everyone is asleep...finally.  Everyone but me.  The rain hitting my bedroom window doesn't help...It doesn't help the incredible sadness I am feeling right now.

Today we said goodbye to our Macy Girl.  Five weeks ago, she was diagnosed with Autoimmune Hemolytic Anemia.  The odds weren't good...I was doubtful that she would even make it two weeks.  She was giving an oral steroid and sent home.  During the first week, I set my alarm and would get up with her for nightly feedings.  She was spoiled rotten.  After almost 7 days, she made a wonderful recovery.  She was full of energy, eating well, and walking on her own.  I was so very thankful for the miracle and extra time we were given.

Thursday I noticed her energy level dropping and by Friday I was incredibly worried about her.  I had to leave for a race in Chicago and left her in the hands of my wonderful hubby and three kids.  I returned home to find that she had gotten worse.  I could hardly stand to watch my beautiful pitt mix stumble and fall when trying to get up to greet me when I walked in the door.  I could hardly bring myself to carry her outside because she was no longer capable of holding her own weight.  I knew I could not put her through this again.  I prayed that the decision would be clear and I would have peace in whatever it was.

I set my alarm for early in the morning on Sunday.  I made her some hamburger and was hoping to get another dose of steroid down her.  When she wouldn't eat the hamburger my heart dropped...and then when she was clenching her jaws shut so I couldn't even give her the steroid I knew what she was telling me.  She was done...and I had to let her go.

Loss is so hard...watching your own babies deal with such a huge thing is even harder.

My husband and I sat down with each of the kids and gave them a choice if they wanted to go with us or not when we took Macy in to be put down.  My Princess said yes with no hesitation.  My Middle Man had a harder time making up his mind and decided yes at the very last minute.  My Little Man was a no right from the get go.  So, we dropped Little Man off to play with Grandpa and the four of us plus Macy Girl made the emotional trip in.

We arrived and my husband went in to let them know we were there.  They brought a little stretcher out to the car to get her...and we all sobbed as she was wheeled away.  We were set on being there with her when she passed and so we waited for them to get her ready.

All four of us were taken back to a room and Macy was brought in to us.  They told us that we could take as long as we wanted.  So we held her, pet her, took pictures, and just took everything in.  Then, when we were ready, we cracked the door to let them know that it was time. 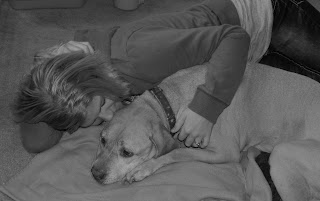 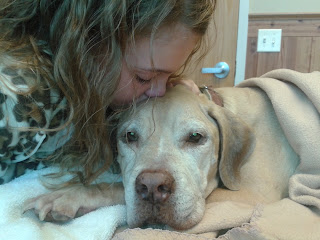 The vet came in and was wonderful.  One thing that she said while she was leaving is that we fought the good fight...and that right there was probably the most encouraging thing she could have said at that moment.  I didn't want to give up on Macy...I didn't want to feel like I failed her...that I didn't do everything I could do for her...and with those words, I felt like this was the right thing to do and she was the messenger sent to tell me.  She left with tears in her eyes and the four of us held eachother and just cried.  We took as long as we needed to and then I took off her collar and we walked out.

On May 15th, 2008 we welcomed our sweet Macy girl in to our home.  She was five and we knew she had been through a lot just from the little that the shelter told us about.  This was her second chance and our goal was to spoil her as much as we could to make up for her first five years.  She napped all day on the couch, ate scraps from the table, spent time laying in the sun on the deck, played with her (one and only) neighbor friend, and even (ssshhhh) spent some lazy days laying in bed with me.  We really lucked out with her...she was such a sweetie from the get go.  She was so patient and wonderful to the kids and got along great with the cat.  These past two years she has had a blast with her little sister Zoey...who is so lost without her right now.  There will never be another like her.

Its all so new and fresh and is going to take some getting used to.  Watching the kids hurt is the hardest part of all.  We miss her terribly...