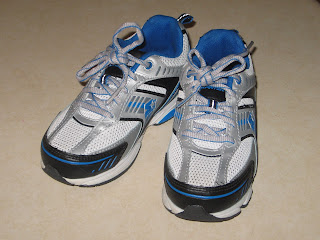 My middle man has been long overdue for a new pair of shoes. I was holding out and knew I would have to get him a new pair before he starts kindergarten. It's been a long, long time since he's had a new pair of shoes...probably before Dan lost his job. All of his tennis shoes have been "new-to-him" and we have been so thankful for that. He has been asking for gym shoes. Today we were at Walmart and he asked again. I told him we would look to see what they had. Well, we found these on clearance for $7 and I couldn't pass them up. Landon tends to get lost in the shuffle. So, today was his day. The other two didn't get anything from the store and he felt so special. He wore his shoes all day (in the 90 something degree heat) and chose to run around the pool in them instead of getting in because he wanted to wear them so bad. He eventually went swimming, but continued to talk about his new shoes. These $7 pair of shoes from Walmart made his day...and his smile and excitement made mine.

little somethin by Beth at 6:03 PM

beautiful blog..pls visit mine and be a follower.. thanks and God bless..

beautiful blog..pls visit mine and be a follower.. thanks and God bless..