My princess turned three less than three months before my third child was born.

I had given birth to three kids in three years.

It's very likely that I could have been crazy back then.

I have never been one to sit still for very long.

So, we got the having kids thing over with as quickly as we could.

It's been a crazy six years.

We got married, I moved, we moved, and we moved again.

We went through some rough marriage stuff.

We bought a house.

We found a cat, picked out a dog, and killed two dozen fish.

Pause and take a breath.

Somewhere along the way, down this crazy road, we lost eachother.

Impossible, some may think, especially since we all reside in the same house.

Actually, it's rather easy.

It's rather easy to wake up everyday and have the usual not phase you one bit, because afterall it's just a same ole, same ole day.

It's rather easy to think that we'll always have tomorrow and today is just another day.

It's rather easy to overlook the little things that are sometimes the biggest blessings.

We have been doing some family building...or maybe it would be considered remodeling.

It was rather hard in the beginning.

Who likes to rethink things when it's been the norm for five or so years.

The norm wasn't quite working for us anymore.

If you would have asked me a year ago if I would have chosen my husband over my kids, I would have either said yes and been lying or said no under my breath and looked around to see if anyone heard me. My kids would have won, hands down.

My husband was someone who worked hard all day so we could have all the "stuff" and have fun during the day while he was gone. He would come home in the evenings and be so exhausted that he would either fall asleep on the couch or sit back and watch us play family and be such a zombie that he couldn't enjoy it...and then get up at 3:30 AM and do it all over again. I ran the house, did everything for the kids, and felt guilty if I left them with Daddy for more than two hours for fear that something would go terribly wrong. I love him and appreciated him...maybe just not as much as I should have.

So, take away the job and you have some tough questions there...some of them which have been asked out loud. On the other side, I would choose Dan. God has been working on remodeling our marriage and our family...I kinda have an inkling why...and we are doing all we can while we wait for the pieces to come together.

Yeah, a lot has changed in these past ten months!

We have always been a family...we are just better now... 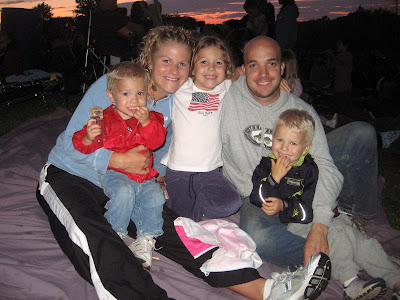 (Thanks, Andrea, for taking our pic!)

little somethin by Beth at 1:18 PM

What an honest post. So much you have been through.

Cling to God, He has good in this for all of you.

Kimmie
mama to 7
one homemade and 6 adopted

Thanks for the testimony of God's goodness even when circumstances are not.