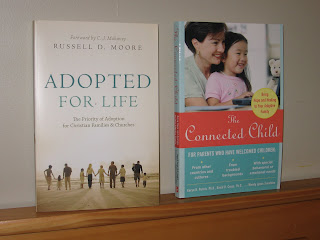 Well, I loved them! Both books were great and I would highly recommend them.

I especially loved Adopted for Life: The Priority of Adoption for Christian Families & Churches. It had me in tears some of the time. This book ties the adoption of children together with our adoption as Christians in a beautiful way. Here is something that jumped out at me:

Our adoption remember, conforms us to Christ's image. So we'll walk this path to maturity too, the path Jesus walked before us. "For you did not receive the spirit of slavery to fall back into fear," Paul tells the church at Rome, "but you have received the spirit of adoption as sons" (Romans 8:15). That has to be said. It's not obvious. It's hard to believe there's a kingdom waiting for us.

We don't fully believe that our new Father will feed us, so we hang on to our scraps and long for the regimented schedules of the orphanage from which we've come. And when our Father pushes us along to new tastes, we pout that he's not good to us. But he's readying us for glory, preparing us to take our place on thrones as heirs.

The Author, Russell Moore, writes about his adoption of their two sons from an orphanage over seas. He talks about the eerie silence of it...babies lined up, alone in cribs, and none of them making a sound because they have learned that their cries go unanswered. He talks about driving away from that terrible place with his two sons and seeing them shake and reach back for the orphanage. Heartbreaking. He goes on to talk about other aspects, things to consider, the process, and how to encourage and support others that are adopting.

I will end with something else from the book that jumped out at me:

It's true that adoption isn't "natural." We have adoptions because we live in a world groaning under the curse of sin and death. Fathers abandon mothers. Mothers get pregnant without marriage. Parents are killed. Diseases ravage villages. It was not so from the beginning. The hard question about adoption -- and the easy ones too -- are only with us because something's gone wrong with the world.

Adoption is modeled after the natural family. But the biological family is also modeled after something -- the kingdom of God in Christ. King Jesus tells us his reign is hidden from "the wise and understanding" but is revealed to "little children" (Matt. 11:25).

The childlike kingdom we've come into is filled with transracial adoptees like you and me. It's made up of the "special-needs" orphans like us. Sometimes adoptions turn out with families that look remarkable similar - almost "natural," you might say. But let's not fall for the carnality that values boys over girls, that pits ethnicities against on another, or that is repulsed by physical or emotional weakness. Let's be the people of Christ, and, like him, let's teach ourselves to welcome children into our homes, even those our culture tells us we're not supposed to want.

little somethin by Beth at 7:40 AM