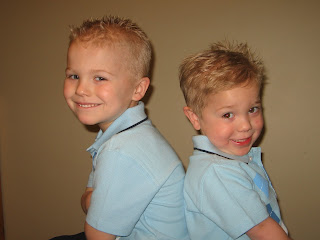 I grew up with a sister just 17 months my junior. My sister was my first friend, my best friend, my maid of honor...we were two peas in a pod. Couldn't have been more different, but our two halves made a whole. It is a relationship that I will have and cherish for the rest of my life.

When we found out that baby number two was a boy, my hopes for Kaitlyn to have a sister kinda went out the window (we only planned to have the two). A world without a sister...the thought saddened me...and still does. I hope and pray she can find a relationship that is comparable...that she can find a sister-like friend to walk this cruel world with, to share secrets with, to band together when teen years get tough.

I entered the world of brothers when we found out Collin was a Collin. My brother didn't have a brother. I have always wondered if he felt like he missed out when he was younger. I know males tend to be different when it comes to friendships...and they feel totally comfortable not going to the bathroom in pairs. :-) I was scared for myself. When two or more boys are gathered there is almost always trouble. Where two or more teen boys are gathered there is almost always something being taken apart, blown up, or set fire...at least that is what I had heard. My Grandpa had many, many brothers and I would hear stories and feel so badly for his mother.

As Collin has gotten older, it's been neat to see a brother to brother relationship up close. Landon is protective. There are many times when I come out to see them sitting on the couch together, Collin on Landon's lap. There are many fights and struggles for dominance but there are no hard feelings and really no need for an apology in both of their eyes. It's a few punches, a kick here, a shove there and they both feel better that they got that out of their system. Now, they do feed off of eachother and they are both daredevils...but I just kinda sit back and let them be boys (I am a little too relaxed with them if you ask my husband). So far, brothers are a piece of cake.

My Mom used to say that it blessed her heart when my sister and I would get along...when she would see the closeness that we had. I now know what she meant.

The other day, Collin was sitting by Landon on the couch. He looked over at Landon and patted him on the head and said, "You're my bestest broder, Wandon," and they went back to what they were doing.

And that blessed my heart...

little somethin by Beth at 6:41 AM